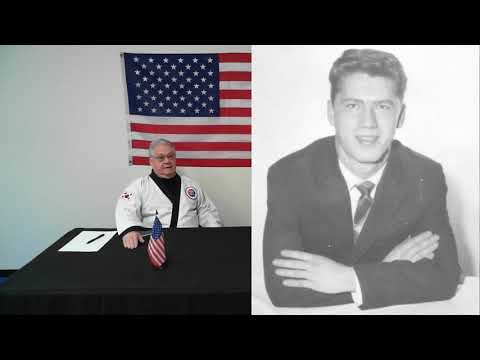 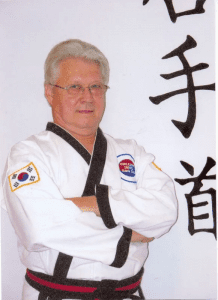 It has been said that martial artists are not born: they are made. Their identities emanate from those who guide them in their studies. Grandmaster Robert A. Cheezic has spent the last forty-five years educating more than twenty-five thousand martial artists worldwide. He has promoted over two thousand black belts, has fiercely championed the cause of martial arts training for the specially challenged and is internationally respected for his efforts. In the midst of all this success, however, he remains humble – content to make big differences in ordinary ways. Teacher, husband, father, grandfather and mentor, Grandmaster Robert Cheezic embodies his own mantra, “Leave more than you take.”

Born January 2, 1939 in Pittston, Pennsylvania, Robert Allen Cheezic moved to his adopted hometown of Waterbury, Connecticut when he was just five years old. An energetic and athletic youngster, he attended Leavenworth High School where he excelled in sports, earned varsity letters in football and baseball, and served as Vice President of his senior class. After graduation, Cheezic joined the United States Air Force and reported to Stewart Air Force Base in Newburgh, New York where he remained for two years. In 1959, he was deployed to Osan Air Force Base in South Korea, and encountered a man who would alter the landscape of his life forever.Korean native, Jae Chul Shin, was teaching martial arts to American soldiers on base.Fascinated by what he saw, Cheezic gained entry to the club, where Shin took him in as a student.In 1960, Cheezic was awarded Moo Duk Kwan Tang Soo Do black belt number 2278 by the style’s founder, Hwang Kee.Among the first Americans to earn black belt distinction in Korea, Cheezic’s classmates included Bob Thompson, and actor Carlos (Chuck) Norris, with whom he has remained friends. He returned to Waterbury, Connecticut after discharge from the U.S. Air Force, overcome with a desire to share what he learned with others.Cheezic worked full time at the Anaconda Brass and Atlantic Richfield Companies during the day and taught Tang Soo Do in the evenings in a school gymnasium before opening his own studio, The American Tang Soo Do Academy.It was the first Tang Soo Do dojang ever established in the Northeast region of the United States.

In the early 1960’s, the karate tournament scene was electrifying.Cheezic traveled the circuit regularly, performing demonstrations, judging and competing, solidifying an impressive reputation in the martial arts community. On August 23, 1969, the Isshin-Ryu Open Karate Championship tournament in West Springfield, Massachusetts welcomed some of the greatest competitors of the day, including one of its humblest champions, Robert A. Cheezic.Taking center stage at the Eastern States Coliseum, he provided the crowd with stunning self-defense and traditional forms demonstrations before competing in the tournament himself.Along with some of his students, Cheezic dominated the day and impressed crowds with more than his physical skill.He exuded an aura of emotional maturity and discipline that was enviable.It was a byproduct of the serious training he received from his teacher, Jae Shin, a disciplined taskmaster who expected students to strive for their personal best.Cheezic did not disappoint.In a 1974 “Official Karate” magazine interview, Shin spoke of his former student, “Of the thousands of students I have trained only two have attained champion status – Chuck Norris and Bob Cheezic.”Cheezic was a regular at karate competitions in the Northeast region of the United States, and as the world of competition evolved, so did he. He retired from competition in the early 1970’s and sponsored his students instead.He formed sport karate teams from within his own organization and campaigned for them as they traveled to international competitions and cultural programs in the United States, Australia, Russia, Poland, Bermuda, China and Paris.At the same time, Cheezic became a tournament promoter.His Connecticut Yankee Nationals annual open karate tournament will celebrate its forty-third year October 2007.

Teach self-respect and respect for others through the study and practice of Tang Soo Do, a very historic and traditional Korean discipline of the martial arts. The ideas of respect and tradition are pervasive in all of our activities and for all students at every level of achievement.
– Grandmaster Cheezic

The House That Cheezic Built

A handful of students was all he needed in 1961 when Grandmaster Cheezic began teaching Tang Soo Do in Waterbury, Connecticut.Looking back, he could not have foreseen the impact he would make on the American martial arts scene as one of its modern masters.His love of Tang Soo Do and respect for its traditions was ample motivation for the trail he was about to blaze.Training those days was tough.There was no safety gear or specialized equipment.There was, simply, the martial art itself, which Cheezic was determined to share with others.In 1971, the Cheezic Tang Soo Do Karate Federation, an independent martial arts organization, was established.Its modest beginnings included classes taught at Waterbury headquarters, local recreation centers and schools.By 1999, however, the Federation’s success had become remarkable.It maintained six college-based Tang Soo Do schools, fifty-one domestic branches and four international programs.Building an alliance of this size was not easy.Cheezic believes that the devotion of individual members to common goals has contributed to his organization’s success.

According to the Cheezic Tang Soo Do Federation website (www.cheezictsd.com), its goal is to “teach self-respect and respect for others through the study and practice of Tang Soo Do, a very historic and traditional Korean discipline of the martial arts. The ideas of respect and tradition are pervasive in all of our activities and for all students at every level of achievement.” Ultimately a compliment to his leadership, Cheezic’s black belt instructors are eager to pass on what they have learned to others. As a result, it seems that there is no end to the Cheezic Tang Soo Do Karate Federation’s growth. To date, Grandmaster Cheezic has a board of over fifty master belts that assist him in overseeing the operation of seventy federation-sponsored schools worldwide.

Hero for the Specially Challenged

Grandmaster Cheezic has dedicated himself to servicing the needs of the physically and mentally challenged.The cause has been dear to his heart since former student, James Brewster, was paralyzed in a swimming accident in 1966.Challenged athletes are an integral part of the Cheezic Tang Soo Do Karate Federation family.Members have included stroke victims, individuals with Downs Syndrome, stress disorders, Cerebral Palsy, Spina bifida, visual or auditory impairments, and those who suffered accident-related trauma.The success of the Cheezic Tang Soo Do Federation challenged athlete program has been overwhelming even though skeptics have doubted whether challenged individuals could succeed in martial arts.Grandmaster Cheezic has proven them wrong.His challenged athletes have demonstrated that their training has not only been appropriate, it has been overwhelmingly beneficial.Training in Tang Soo Do has encouraged the development of positive self-esteem in challenged members.They develop confidence, respect, awareness and control.Besides participation in Federation sponsored events and tournaments, the challenged team has performed dozens of public demonstrations, including several at the Connecticut Olympics and the International Special Olympic Games.Grandmaster Cheezic credits much of the challenged team’s success to Janet Grimes, a fourth degree black belt who heads the program.Ms. Grimes, a longtime employee of the State of Connecticut Department of Mental Retardation, received the Cheezic Tang Soo Do Federation’s 2006 Humanitarian Award in recognition of her many years of dedicated service.

It has been said that the true measure of a man lies in how he treats his family. For Grandmaster Cheezic, family extends far beyond biology. As his wife of forty-five years, Alyce can tell you, he is a natural born humanitarian and not only a man of great strength, but of great compassion. This is, of course, evidenced through the mutual adoration of his children and grandchildren. Clearly, that sentiment is also echoed in the hearts and minds of the thousands of martial artists’ lives he has touched across the globe. It takes great skill and commitment to lead others, and Cheezic has never wavered in his effort to build honorable martial artists. He steadfastly requires that his students become involved in community service, exhibit good citizenship and seek excellence in their personal and professional lives. Coupled with solid martial arts training, they become productive, well-rounded citizens of the world. He only asks one thing of them: “Leave more than you take.” Requiring the same of himself, he leads by example. Through civic and community-based activities, Cheezic has volunteered his time and personal resources to benefit others. His efforts have positively affected countless lives. Robert Cheezic’s association with the Boy’s and Girl’s Clubs of America began at an early age. The clubs offer programs and services to children and families in need. Dedicated to the empowerment of the disadvantaged, Cheezic knows first hand the benefits of positive youth development programming. As a child growing up in one of Connecticut’s largest and toughest cities, he enrolled in the boys program at the Waterbury Anderson Boy’s Club, which he credits with providing him positive outlets as a child. Fiercely loyal to his associations, Cheezic has remained affiliated with the club since childhood. As an adult volunteer, Cheezic was voted president of the Anderson Boy’s Club Alumni Association, and currently serves on their Board of Directors. He is an Anderson Boy’s Club Alumni Hall of Fame member, inducted in 1991. In recognition of his tireless work and dedicated service, he was awarded the Boy’s Club 2004 Lifetime Achievement Award. In addition to his work at the Boy’s Club, Robert Cheezic has been an unwavering symbol of humanitarianism in his community, involved with various groups and organizations. He served as a member of the Catholic Family Services Board of Directors, the Waterbury Republican Town Committee, chairman of the Arco Metals Civic Action Program and as a 1993 Waterbury Sportsman Club honoree.

The martial arts world has also honored Robert Cheezic in many ways over the years.In 1991, he was inducted into the New England Karate Hall of Fame, the Professional/Amateur Karate League (PKL) Hall of Fame named him their 1996 Promoter of the Year, and in 2001 he was inducted into the Action Karate Hall of Fame.2006 brings international honors with Cheezic’s induction into the Budo International America Hall of Fame as a Legend Grandmaster of Tang Soo Do.The ceremony honored a select few members of the international martial arts community in recognition of their outstanding contributions.Martial arts legends, Don “The Dragon” Wilson, Cynthia Rothrock and Christine Bannon-Rodrigues, along with some of Cheezic’s students, family and friends, helped to make the honor memorable.For Grandmaster Robert A. Cheezic, a winning spirit has transgressed every aspect of his life.The driving passion behind his success has been his love of Tang Soo Do Karate, and by instilling that passion in so many others, he has contributed to humanity in immeasurable ways.

Clear Clear All
Scroll to Top